A Wonderful Little Baseball Tale That Sincerely Made Me Smile, This Morning. I Think Anyone (who’s a fan of Baseball or Baseball Cards) Can Easily Relate To This One.
I Hope You Enjoy It As Much As I Do.
GREAT STUFF, Mr. Bill!!!
-B.

The On Deck Circle

When I first began collecting baseball cards as a kid back in 1974, it quickly became apparent that the Topps Chewing Gum  Co. had a bit of a problem with quality control.  Not that I understood what that term meant, exactly, but the baseball cards themselves were often off-center, of varying degree of glossiness and / or brightness, and sometimes included print-spots that resembled extra-large zits on player’s faces.

To my young mind, worse than any of the above grievances was the issue of coming across the same faces numerous times, pack after wax pack.  Try as I might to come up with a Johnny Bench or a Reggie Jackson, invariably I would pull a Ray Fosse, a Jack Brohamer, or a Tom House.

Or, most frustratingly, for (literally) my money, a Norm Miller. 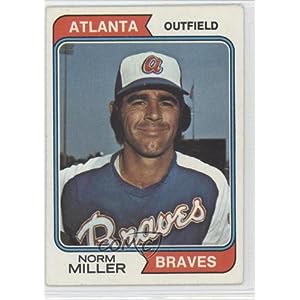 Norm Miller was a backup outfielder for the Atlanta Braves.  Unbeknownst to me at the time…

It Ain’t Even 6AM, Yet, And I’m Up Listening To Some ENGELBERT HUMPERDINCK.
Sound Like A Great Way To Wake-Up To You?!
GREAT!!!
It’s Working Out Brilliantly For ME, Also!!! 😀
-B.

It’s Just One Of Those Types Of Mornings.

So I’ve Been Spending MY Morning Listening To Some Of My ALL-TIME FAVE-FAVE Tunes.

…I Eventually Landed Upon My…

…On The Ole MP3Player.

A Lot Of Folks Simply DO NOT Understand WHY I Like This Type Of Tunage.

I’m Of The School That Honestly…

Every Single Time I Hear His Version…

To ME, It’s THAT DAMNED GOOD.

I Used To Get Made-Fun-Of A LOT During…